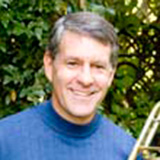 Nat Wickham is Professor of Music, Trombone and Euphonium. A versatile performer and experienced teacher, his work as a classical and jazz soloist, recording artist, clinician, and adjudicator, has led to performances throughout the United States, Canada, and Europe. Currently, he is principal trombonist with the Greeley Philharmonic Orchestra and lead trombonist in the Colorado Jazz Orchestra. He has performed with the Colorado Symphony Orchestra, Rochester Philharmonic, Colorado Music Festival, Spokane (WA) Symphony, Boulder Philharmonic Orchestra, and the Boulder Brass. He was principal trombonist with the Rochester Broadway Theater League for two years. He currently serves on the Board of Directors for the International Trombone Association and is a frequent performer at ITA Festivals. Under his baton, the UNC Trombone Choir was invited to perform at the 2001 International Trombone Festival in Nashville.

For six years he was lead trombonist and soloist in the Bob Curnow Big Band and has performed with the Woody Herman Orchestra, Natalie Cole, the Nelson Riddle Orchestra, and countless jazz artists.

Wickham holds the Doctor of Musical Arts and the Performer’s Certificate from the Eastman School of Music. His BM and MM degrees in trombone performance are from the University of Northern Colorado. He has studied trombone with John Marcellus, Buddy Baker, Carl Lobitz and Roy Main. Jazz improvisation and composition teachers have included Buddy Baker, Ramon Ricker, Jiggs Whigham, Bill Dobbins and David Hanson. Prior to his appointment at UNC, Wickham taught at the Eastman School of Music, Eastern Washington University, Central Michigan University, and the University of Wisconsin at River Falls.