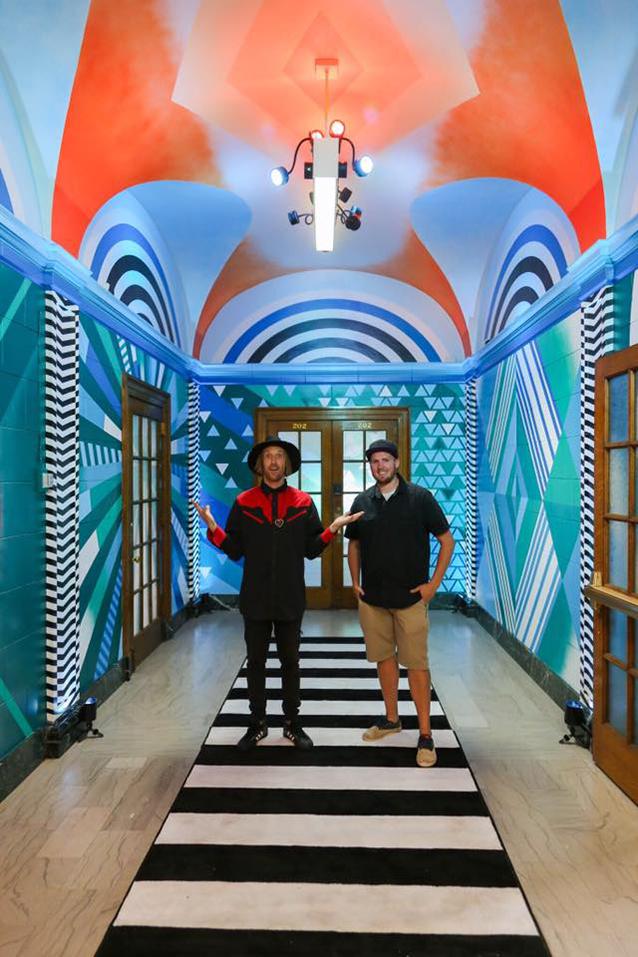 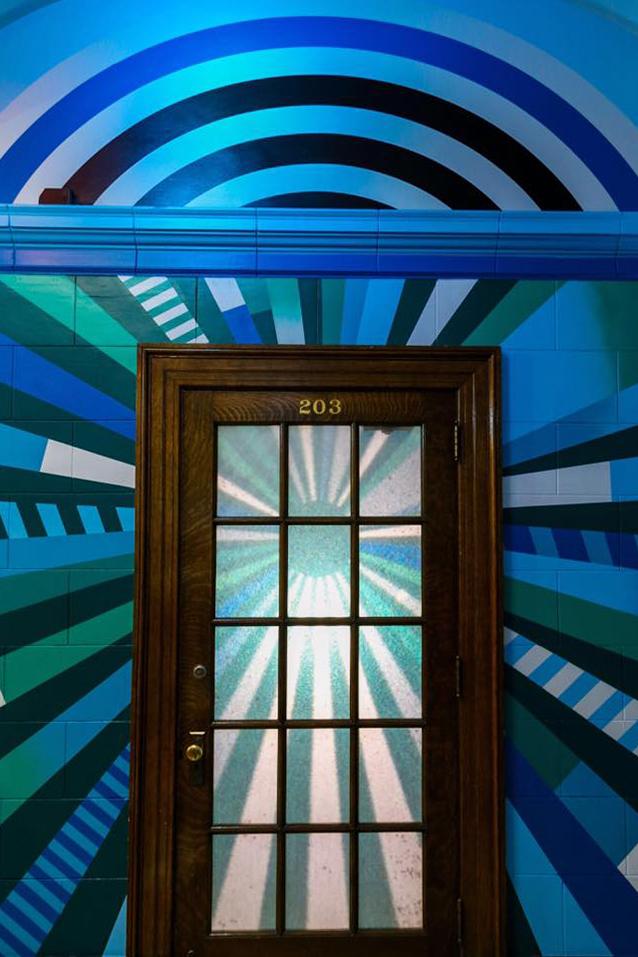 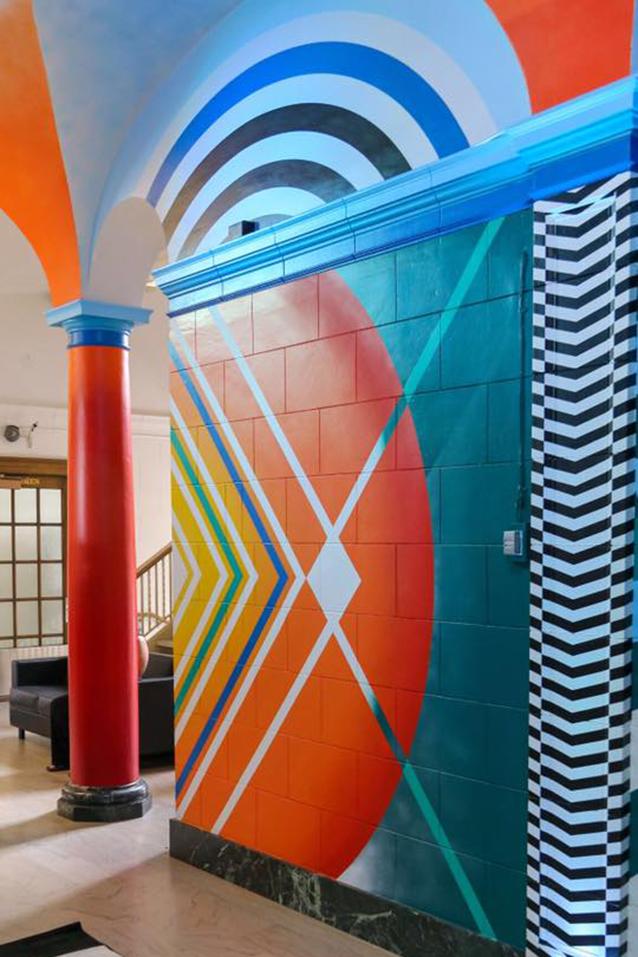 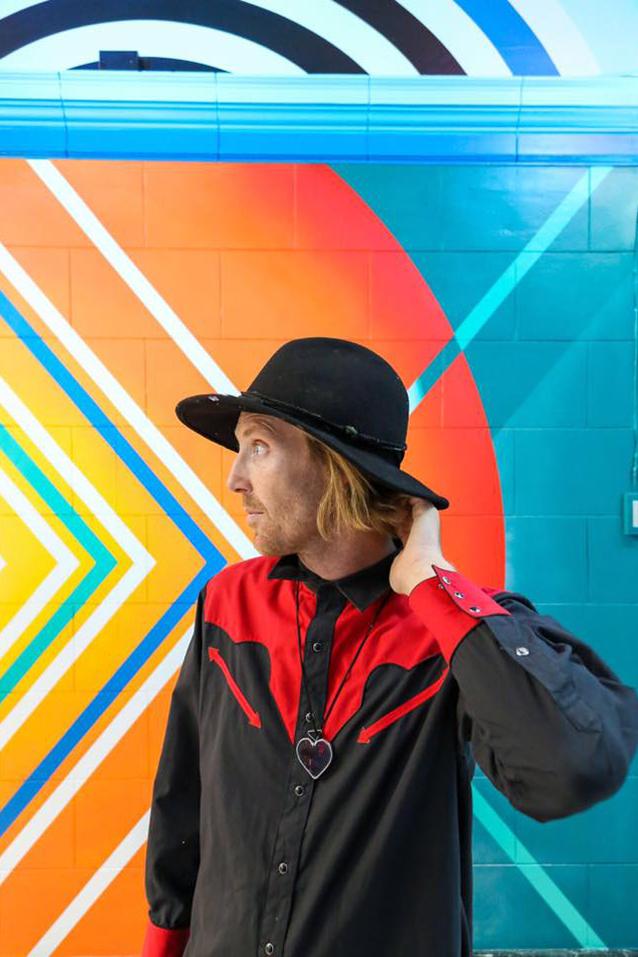 Andrew Bablo (Beverly, MA) and Pat Milbery (Denver, CO) will return to UNC in 2018 for Phase 2 of the Crabbe Hall mural project! The artists' two-week residency in Crabbe Hall will complete the second half of the lobby's transformation. Last year, Bablo and Milbery created the site-specific mural, In A New Light outside of the Oak Room Gallery. The concept for the mural was to not only to create an immersive, inspiring portal for students in the School of Art & Design, but to signal key components of 2D and Foundations, courses taught in that wing of the building. This year, the duo is tackling the adjacent half of the hall where 3D Design and Digital Fabrications are housed. The artists will incorporate elements of design that speak to the nature of 3D Printing and Design.

The lobby of Crabbe Hall, which houses our Oak Room Gallery and studios, served as a blank slate for duo Andrew Bablo and Pat Milbery to tackle in August 2017. The east coast/west coast collaboration between Andrew Bablo and Pat Milbery resulted in an unprecedented revitalization of Crabbe Hall lobby. Built in 1919, the building houses UNC’s Oak Room Gallery and Visual and Performing Arts studios. Bablo and Milbery were inspired by the architecture and characteristics of the building such as its original oak doors, green marbled baseboards, and sky high arches and wanted their footprint within the space to compliment, not detract, from the classic beauty of the building’s interior. The result was a magical, sun-drenched interior (in perfect time for the eclipse, no less!) of aerosol paint. 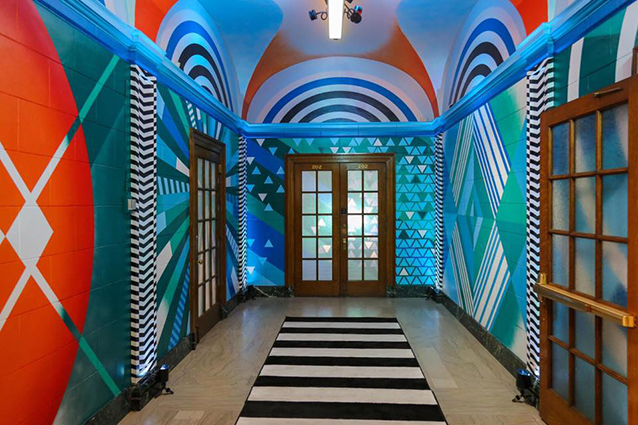 Pat Milbery is, above all, a creative collaborator, as well known for the large-scale murals he's created alongside some of the most prominent street and graffiti artists in the world as he is for the playful photo shoots and video parts he's participated in as a pro snowboarder. His vivid street art collaborations adorn the walls of dozens of boutiques, breweries, residences, bars, and other businesses in Denver, around the Rocky Mountains, across the country and around the globe, and he's helped curate and create major art installation projects for brands including the Ford Motor Company, X Games, Budweiser, Zumiez, Loveland Ski Area, Wahoo Fish Tacos, and Pabst Blue Ribbon. He has shared snowboard contest podiums with the likes of Shaun White and Travis Rice, and the Snowboard Camp Tour he founded to make freestyle riding more accessible to kids is now entering its second decade. He's also the co-owner of So-Gnar, an umbrella collective responsible for the Snowboard Camp Tour, the So-Gnar streetwear and apparel line he helps design, and the Shredded Beats hip-hop concert series he promotes. He's equally proud of his Minnesota roots and his 17 years of Colorado transplant status, and splits his time between Denver and Golden and wherever his van full of snowboard gear and aerosol cans take him.

From design to production, Andrew Bablo builds, crafts and experiments through the use of various media. Seeing no boundaries or limitations, he loves to work interactively, large-scale and in the eye of the public. Bablo started his career in branded and licensed apparel design, working with major league sports teams across the country. He spent years creating garments for several retail brands including Reebok and ’47. Later, Bablo collaborated with the industry’s top artists, athletes and brands as the former Editor-in-Chief of Steez Magazine. Over the course of nine years and 35 issues, Bablo grew the magazine from a black and white photocopier to a major publication, distributing throughout thousands of major newsstands such as Barnes & Noble in the U.S. and Canada. In 2015, Bablo founded Steez Design, bringing his artistic background to the commercial design world. Bablo graduated from Montserrat College of Art in 2007 with a Bachelors Degree in Graphic Design. Currently residing north of Boston, he works as an artist, designer and entrepreneur.