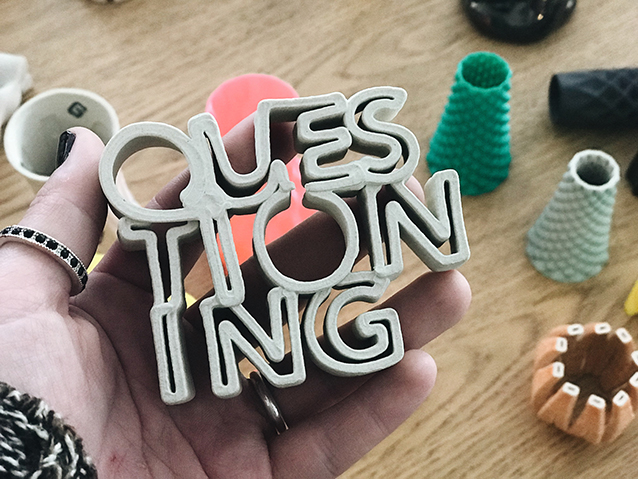 Happy Tuesday, Friends!
For this week's blog, rather than going day by day through what I've been working on within the Petteys Collection, I thought I would focus on one really fantastic experience I had this week in engaging with a living artist.  Sound good?
UNC was fortunate enough to welcome Taekyeom Lee as our visiting artist for the week.  Lee traveled from North Carolina where he teaches Graphic Design at Appalachian State University. Beyond teaching, Lee is an interdisciplinary artist who has worked rather extensively in the realms of 3D printing.  His innovative work has earned him places in shows both nationally and internationally where he has received national recognition and numerous awards.  While he was at UNC, Lee gave a public artist talk on Monday night, as well as some demos for professor Agnes Ma's 3D Design foundations course Tuesday morning, and her Digitial Fabrication class later that evening. 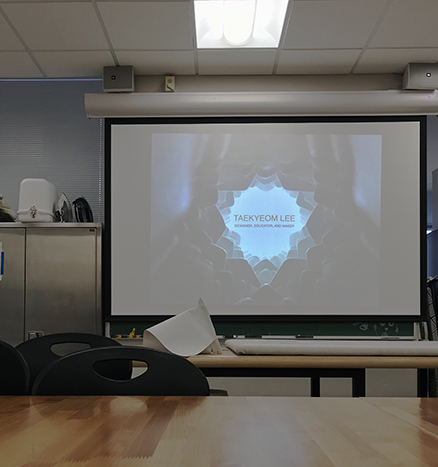 In his artist talk, Lee gave us an idea of where he started, where he has been, and where he is going. It's clear that the majority of his work has centered around the idea of typography and figuring out how he can bring reading experiences into dimensional space. To do so, Lee has started the innovative process of 3D printing ceramics as text using a printer he built and programed himself using a relatively inexpensive "DIY kit" he found online. Throughout the entire talk, I was baffled by just how brilliant he is, I mean really. If there is a problem, he does not look at it as a problem. Rather, it is an opportunity to create something. In his talk, he mentioned that one of the rules of a designer is to be a tool maker because otherwise you're just going to be left waiting for someone to make the tool for you or you just abandon the project all together. Lee doesn't see either of those as viable solutions, and it shows in the production of his work. 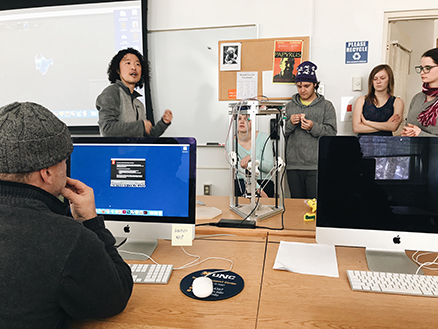 It was fun getting to see the processes he mentioned in his artist talk come to life when Pam and I joined Agnes' morning class for Lee's demo day!  We got to watch one of his ceramic pieces being created as his printer and program went to work, extruding the clay into a complete piece while Lee explained the process he went through to get to this final product.  He then went on to tell us about the concept of scanning a three-dimensional object into the computer, using the camera from the Xbox Kinect, where the shape could be manipulated before exporting it and eventually moving towards physically printing it. Lee let the student's play around with the scanner and it was so fun seeing their faces and full figures start to emerge digitally on the screen.  While time did not allow us to print any of these students, we did learn a lot about what the process would look like had we gone forward into that printing stage.
Now, remember that piece I mentioned he printed before? Well, at the end of the demo period, Lee explained that he is fascinated with this idea of a "collaboration with gravity." Which is exactly what it sounds like.  Lee allowed one student, to take the piece and fling it off the bat and onto the table.  It was then that he considered the piece to be complete. Here's a video of the collaboration in action:

Having Taekyeom Lee at UNC was truly a great experience and I feel fortunate to of been able to experience his brilliance alongside my peers and faculty alike. If you haven't checked out his work already, definitely be sure give his Instagram a gander – you won't be sorry!