College of Performing and Visual Arts 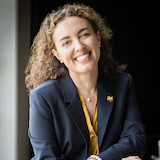 College of Performing and Visual Arts

As as artist and educator, Cristina is passionate about the transformative power of dance, somatic techniques, and choreographic thinking as tools for socially aware and feminist leadership. Her research interests involve dance pedagogy, interdisciplinary improvised performance practices and queer and migration studies.

She holds an MFA from the University of Colorado at Boulder with a secondary emphasis in Gender Studies and Somatics and trained at the London Contemporary Dance School where she gained a Postgraduate Diploma with distinction dancing and touring across Europe with Edge, the Postgraduate Company of LCDS. As a dancer, she performed works by Hofesh Schechter, Jonathan Lunn, Charles Linehan, Maresa Von Stockert and Yann Lheraux amongst others. In Ireland as part of the Daghdha Mentoring Programme, she was in Michael Klien’s “Sand Section” and in “Ruins” forMyriad Dance Company. In 2007 she co-founded Legitimate Bodies Dance Company, the dance company in residence at Birr Theatre and Arts Centre and supported by Offaly County Council. The company has toured to some of the most important venues and festival in Europe, the USA and Mexico like Aerowaves Dance Festival at The Robin Howard Theatre London, Dance House Limassol, Auditorium Theatre Rome, the European Parliament in Brussels, the Dublin Absolute Festival and Tanzmesse Dusseldorf, Purdue University and the Black Box at the National School of Contemporary Dance in Mexico City, thanks to the support of Culture Ireland. Cristina's awards include “DanceWEB European Scholarship”, two Bursary Awards, the Project Award and several travel awards from The Irish Arts Council and the European Cultural Foundation.

From 2008 until 2014 she was the director of I.F. O.N.L.Y. the first and only festival in Ireland dedicated to dance solos.   In 2013 she moved to Mexico to work at Universidad De Las Americas Puebla as a full-time professor, becoming the Chair of the Arts Department there in 2015. During her time in Mexico, she co-directed the festival Performatica and was a finalist in the 4x4 choreographic contest in Tijuana. Cristina has presented her scholarly work in several conferences and guest residencies in the US, Latin America, Canada, Australia, New Zealand, and Europe and has created original choreographies and performances for several universities like UTSA, Purdue University, Texas State University San Marcos and Texas A&M Corpus Christi.

From 2017-2021 she was an Associate Professor and Chair of the Theatre and Dance department at the University of Texas at El Paso and served as President for the World Dance Alliance Americas. In El Paso she was part of the interdisciplinary research group Engineering + Art + Science = Social Impact (EASSI), which was granted start-up funding and the use of space at UTEP’s new interdisciplinary building.

Most recently, Cristina has been appointed to the Board of Directors of the Colorado Humanities, and has published an article with co-author Dr. Dara Milovanovic, Head of the Department of Music and Dance at the University of Nicosia, Cyprus.