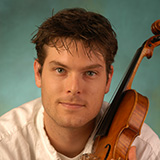 Since his appointment at the University of Northern Colorado in 2013, Associate Professor of Violin Jubal Fulks has become one of the most successful and sought-after violin teachers in Colorado. His students include competition winners at the state, regional, and national levels, many of whom have gone on to lead professional careers as music educators, orchestral musicians, and attend prestigious music festivals and graduate programs throughout the United States and abroad.

Dr. Fulks’ unique and comprehensive scale method forms the foundation of his students’ development, incorporating fundamental principles from both the Ivan Galamian and Dorothy Delay schools of violin technique to specifically tailor scale practice to each student’s individual area of need. Students learn how to use interleaved practice techniques to achieve rapid and consistent results in memorization, technique, and musicality while maximizing efficiency of practice time. Repertoire across a broad historical spectrum is emphasized, including solo Bach, concerti, etudes, sonatas, new music, commissions, and showpieces, all in an environment of supportive partnership. In addition to regular lessons, students attend weekly violin studio classes, where they are provided with invaluable opportunities to perform new repertoire in collaboration with their peers. This studio class allows students to experience how others approach and overcome challenges, while developing a sense of community. Dr. Fulks also directs the instrumental section of the URSA consort, UNC’s historically-informed early music performance ensemble. Th URSA consort performs seventeenth- and eighteenth-century works for chamber orchestra and choir, using the exciting and improvisatory style of the period. Founded in 2014, the URSA consort has quickly risen to be one of the premiere performing ensembles in the UNC School of Music.

An acclaimed performer, Dr. Fulks maintains and active and multi-faceted performance schedule. Along with his UNC School of Music colleagues Adam Zukiewicz and Gal Faganel he formed the Colorado Piano, which performs concerts, outreach, and recruiting activities across the region and nationally. Recent performances include Weill Recital Hall at Carnegie Hall and a feature on Colorado Public Radio’s “Colorado Spotlight,” and the trio looks forward to beginning a Greeley-based concert series to bring high-quality chamber music to northern Colorado. Dr. Fulks also serves as a leader and founding member of Sinfonia Spirituosa, a baroque chamber orchestra based in Sacramento, California. Sinfonia Spirituosa is dedicated to presenting bold, historically-informed performances on period instruments, and to bringing to life the broad spectrum of color, affect and rhetoric inherent in the music of the Baroque era.

Dr. Fulks has performed as soloist with orchestras across the United States and has been heard on National Public Radio’s “Performance Today.” His orchestral and chamber music experience includes Grammy-nominated performances with Philharmonia Baroque Orchestra in the San Francisco Bay Area, and in New York City at the Mostly Mozart Festival at Alice Tully Hall, Weill Recital Hall, the Jazz at Lincoln Center series, and the New York String Orchestra at Carnegie Hall. As a recitalist, he has appeared at numerous summer festivals and concert series in the United States and Asia and has toured extensively in Europe. During the summer months he is on the faculty of Green Mountain Chamber Music Festival in Burlington, Vermont and has been

a faculty member at Montecito International Music Festival in California, Lutheran Summer Music Festival in Iowa, and Kinhaven Music School in Weston, Vermont. Dr. Fulks holds Bachelor’s and Master’s degrees in violin performance from the University of North Carolina School of the Arts where he studied with Kevin Lawrence, and the Doctor of Musical Arts degree from the State University of New York at Stony Brook, where his teacher was Mitchell Stern. He lives in Greeley with his wife, hornist Lauren Varley, and their children Patrick, Finnian, Oliver, and Flannery.