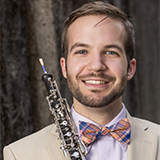 Known for his engaging performances and “extraordinary...remarkably beautiful oboe playing” (Fanfare Magazine) Timothy Gocklin shares his passion for music through his deep love for the oboe. Tim's relationship with the oboe began at age 11, the day after attending a military band concert featuring the instrument. Since then, he has gone on to perform with some of the world's leading artists, including Yo-Yo Ma, Peter Frankl and David Shifrin.

After furthering his studies with the oboe, Tim became captivated by the art of chamber
music. This love of chamber music led him to found the Akropolis Reed Quintet. Having begun in 2009, Akropolis has won six national chamber music prizes, including the Fischoff Gold Medal and Grand Prize at both the Plowman and MTNA chamber music competitions in 2011. The ensemble, all of whom remain the original members, has recorded three albums to date, most recently The Space Between Us in March, which showcase original works for reed quintet commissioned by the ensemble by composers such as John Steinmetz, David Biedenbender, Rob Deemer, Paul Dooley and more. Altogether, Akropolis has commissioned nearly 30 works for the reed quintet genre. In the pursuit of creating a stronger presence for the reed quintet, Tim has led chamber music masterclasses with Akropolis at colleges and universities throughout the country and around the world such as the University of Michigan, University of Texas at Austin, Louisiana State University, as well as Khalifa University and NYU in Abu Dhabi.

Outside of Akropolis, Tim has performed in a wide variety of settings with ensembles such as Le Train Bleu under the direction of Ransom Wilson, Cantata Profana, New York Chamber Soloists, The Mozart Orchestra of New York, The Orchestra of St. Luke's and, most recently, The Phantom of the Opera on Broadway. Tim has also had the pleasure of attending Chamber Music Northwest (CMNW) as a protégé artist for the past three summers, premiering new works by composers David Schiff and John Steinmetz and collaborating with artists of the Dover and Miro String Quartets, in addition to many artists of the Chamber Music Society of Lincoln Center. In 2014, Tim experienced Portland, OR for the first time at CMNW and was fortunate to perform alongside David Shifrin and oboist Allan Vogel in a program of Dvorak's Wind Serenade, Op. 44 and Mozart's Gran Partita in B-flat, KV 361. Additional summer engagements have included appearances at the Caramoor Festival with the Akropolis Reed Quintet and Orchestra of St. Luke’s, the Summerwinds Festival in Münster, Germany, the Yellow Barn Music Festival, Cape Cod Music Festival and fellowships at the Norfolk and Sarasota Chamber Music Festivals.