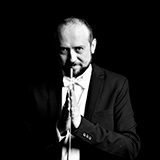 From 2011 to  2014, Andrés was the Associate Conductor of the Frost Symphony Orchestra in Miami, where he led important symphonic, chamber, operatic, and recording projects including several world premieres, a fully-staged production of Mozart’s “The Magic Flute” opera, and a performance with members of The Cleveland Orchestra.From 2008 to 2010, while he was pursuing a Master of Music degree in Conducting with Maestros Miguel Harth-Bedoya and Germán Gutiérrez, Andrés served as Assistant Conductor to the TCU Symphony Orchestra. During this time he was also appointed Conducting Fellow of the Fort Worth Symphony Orchestra. During the three consecutive seasons he held this position Andrés appeared several times in the summer festival “Concerts in the Garden”, the educational series “Adventures in Music”, and the annual show “Home for the Holidays”. Andrés has also participated in conducting Masterclasses with Baldur Brönnimann and the National Symphony Orchestra of Colombia; and Giancarlo Guerrero, in partnership with The Cleveland Orchestra Miami. In 2009 Andrés was the Co-Founder and Artistic Director  of The Sinfonietta of Fort Worth, in Texas. With this project he achieved the integration of professional musicians, music students, and amateurs from all the Dallas-Fort Worth Metroplex.A great advocate of the symphonic movement of Latin America, Andrés Felipe Jaime has worked for years as researcher and performer, building a wide repertoire of various generations of composers, including world premiere performances and commissions. He is the author of "Orchestral Music of Latin America: A Catalog for Performers"; and co-autor of “Latin Orchestral Music: an online catalogue”, together with renowned Peruvian conductor Miguel Harth-Bedoya. Andrés worked for many years as Publishing Manager of FILARMONIKA Music Publishing, a company with a mission to discover, preserve, and disseminate the musical legacy of the Americas. Born in Medellín, Colombia, Andrés graduated as a cellist from the Universidad EAFIT, holds a Master of Music degree in Cello and Conducing  from the Texas Christian University, and also completed a Doctor of Musical Arts program in Orchestral Conducting at the University of Miami, as a student of Thomas Sleeper. “[Andres Jaime] drew a remarkable performance from the youthful musicians. He elicited colorful, rhythmically incisive playing from all sections...”  “Jaime drew lustrous playing from the strings and a snappy, well-coordinated effort from the full ensemble...”-Lawrence Budmen, South Florida Classical Review. Miami, Florida (USA)