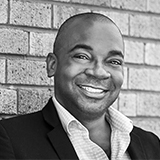 Declared a “skyscraping tenor” in a review by Arkansan music critic Eric Harrison, Dr. Charles Moore hails from Kingston, Jamaica, and had his early music beginnings in the Boys Choir of the St. Richard’s Catholic School under the baton of internationally renowned conductor and musician Lloyd Hall. While maintaining an active national and international performance schedule, Dr. Moore received his Bachelor of Music degree in Vocal Performance from the University of Mississippi and his Master of Music and Doctor of Musical Arts Degrees in Performance and Pedagogy from the Louisiana State University. His area of focus in his terminal degree was on the works of H. Leslie Adams.

Dr. Moore has also done much work in the preservation and dissemination of folklore and music forms within the Caribbean. This includes his membership with the Jamaica Folk Singers as well as participating in research which led to the declaration of the Maroons of Jamaica as a UNESCO Masterpiece of the Oral and Intangible Heritage. This has fueled his interest in presenting the music of minority composers and features their work in his recitals. These composers include Robert Owens, Noel G. Dexter, H. Leslie Adams, Harry Burleigh, Jacqueline Hairston, and Ned Rorem, to name a few. His pedagogic interests include vocal pathologies and injuries, as well as the paths to recovery for the singer and performer

He currently serves as Instructor of Voice at the University of Northern Colorado and is an active founding member of Opera S.O.S. at LSU, a program to designed to provide meaningful experiential opportunities for budding professional singers.