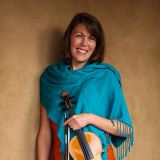 Violinist Dr. Sarah Off has established herself as an innovative and passionate performer and educator. Her performances have been described as “receiving rapturous reception” (The Times, London), “brilliant and seamless with great focus” (AZ State Press) and “intuitively talented” (Bridge Initiative).

She regularly performs as a soloist and chamber musician and has performed in Iceland’s Harpa International Music Festival, Manchester Music Festival in Vermont, Music in the Mountains Festival and Crested Butte Music Festival in Colorado, Oh My Ears New Music Festival, and as soloist with the Boulder Symphony, the Greeley Philharmonic, and Durango’s Music in the Mountains Chamber Orchestra, among others. Her recent World Premiere performance of Dylan Fixmer’s Concerto for Violin was featured in The Times - London, on Radio Classique – Paris, and on Colorado Public Radio’s “Morning Edition” and “All Thing’s Considered”.

An avid chamber musician, Sarah has had the privilege of working and performing with the Brentano, Juilliard, and Orion String Quartets, through the String Quartet Residency program at Arizona State University, as well as collaborating with the Arizona Contemporary Music Ensemble, and the American Composer Alliance. As an advocate of new music, Sarah frequently commissions and performs new works for violin. Some of her recent premieres and commissions include her solo album “Alone” (2021) featuring works by composer, Dylan Fixmer as well as performances for the Open Space New Music Festival, the Crested Butte Music Festival and as Guest Artist at the University of Wisconsin, Superior.

From 2011-2018, Sarah performed as the violinist and co-founder of Tandem Duo with percussionist Marilyn Clark Silva. As composers and advocates of new music, Tandem Duo wrote, commissioned, and premiered newly composed works. In 2016, they hosted the International Kondo Festival which showcased the work of Japanese composer Kohei Kondo. During this time, they premiered several of Kondo’s works with the composer in attendance. In 2017 the Tempe Center for the Arts Theater commissioned Tandem Duo to compose and perform the original score to the play Some Velvet Morning by Neil LaBute. Shortly after, Tandem Duo was named “Resident Artist Group” for TCA. Tandem Duo released their sophomore album Velvet Scraps in 2017 and began collaborations with The Bridge Initiative Theater Group, EPIK Dance Company, and The Torch Theater. In 2018 Tandem released their final album Dear Elizabeth shortly after performing the premier of their score for the play “Dear Elizabeth” in collaboration with the Bridge Initiative Theater.

Sarah is an enthusiastic music educator and currently serves as Assistant Professor of Violin and Music Business and Co-Director of the Center for Art Entrepreneurship at the University of Northern Colorado College of Visual and Performing Arts. Additionally, she was named the 2022-2023 “Dean’s Fellow of Creative Scholarship and Community Engagement” at UNC. As an educator, Sarah aims to provide students with a solid understanding and command of their instrument and musicianship, balanced with expertise in entrepreneurship and business savvy. She believes that creativity, advocacy, business skills and community engagement are vital for the sustainability and progress of the arts in today’s industry. Her recent public speaking engagements include presentations for the American String Teachers Association National Conference, the College Music Society’s National Conference, Women in Jazz National Festival and the Colorado Music Educators Association Conference.

Having grown up in the rural Colorado town of Del Norte, Sarah has a strong passion for finding opportunities for rural areas to experience the musical arts. She is Co-Founder and Artistic Director of the Mt. Blanca Summer Music Conservatory in Colorado, and regularly performs in concerts throughout rural areas of the Southwest. Sarah’s doctoral studies at Arizona State University culminated in a final dissertation on “Building Musical Communities in Rural Areas”. Sarah lives in Colorado with her husband, composer Dylan Fixmer, and their dog Bay.