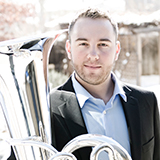 Steve Vaughn, a native of upstate New York, is a freelance musician across the front range of Colorado and is currently Adjunct Professor of Euphonium at the University of Northern Colorado in Greeley, CO. Equally at home performing on both tuba and euphonium, Steve holds the position of Solo Euphonium with Colorado Brass and Principal Tuba with the Fort Collins Symphony.

Steve is an active soloist on euphonium having appeared as a guest soloist with the Boulder Concert Band, Pikes Peak Brass Band, Colorado Brass, and Rocky Mountain Brassworks. In 2015, he took first place in the Arapahoe Philharmonic Gordon T. Parks Concerto Competition. He appeared as a guest soloist with the orchestra performing Vladimir Cosma’s Euphonium Concerto. Steve also performed Jukka Linkola’s Euphonium Concerto as a finalist for the Jefferson Symphony International Young Artists’ Competition in 2014. Steve has also performed orchestral repertoire on euphonium with groups such as the National Repertory Orchestra. As a tubist, Steve has performed with multiple bands and orchestras including the Colorado Springs Philharmonic, Denver Municipal Band and San Juan Symphony. Steve is also an active chamber musician having performed with Boulder Brass and was a member of the graduate brass quintet while at CU-Boulder. The quintet was one of 4 international ensembles accepted into the inaugural American Brass Quintet Seminar @ Aspen Music Festival in 2018.

In his spare time, Steve enjoys homebrewing and traveling with his wife Jessica. They have 2 pets, a cat and dog, Bruce and Olivia.