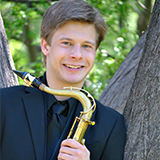 Drew Zaremba is quickly earning a worldwide reputation as a passionate conductor, award-winning writer, and fiery performer.  As a writer, he has composed and arranged pieces for the BBC Orchestra, Metropole Orkest, Dallas Symphony Orchestra, Wycliffe Gordon, Randy Brecker, Lee Loughane of Chicago, Chuck Findley, Eddie Gomez, the Vietnam Classical Players, and Erin Dickins of the Manhattan Transfer.  Mr. Zaremba joined the esteemed faculty of the University of Northern Colorado in 2018 to teach jazz composition and arranging. In 2017, Drew spent two months as a composer-in-residence at the Contemporary Music Institute in Zhuhai, China, where he wrote a concert of music combining Chinese Opera and jazz.  Mr. Zaremba has published music through Sierra Music, UNC Jazz press, and has recorded twenty of his pieces with the University of North Texas One and Two O’Clock Lab Bands.  In 2015, Drew was awarded 1st prize of $10,000 in the Sherman/Barsanti Inspiration Award at the UNT for his premier concert with his orchestra, the Unity Orchestra, which featured Eddie Gomez. Several of Drew’s original compositions have won awards through the ASCAP Herb Alpert Young Jazz Composers award and the JEN student composers showcase.

In addition to composing music, Drew is an active saxophonist, keyboardist, and woodwind artist. In early 2017, Drew released his debut record “Two Sides of the Same Coin” where he is featured on both the saxophone and Hammond organ.  During is studies at UNT, Drew garnered several accolades for his performances, including being named a winner for Downbeat’s Best Undergraduate Soloist in 2012 on saxophone, second place in the Vandoren Emerging Artist Competition in 2014, and playing lead alto in the Disneyland All-American College Band in 2012. As a performer and composer, Drew participated in the prestigious Betty Carter Jazz Ahead program at the Kennedy Center in 2013. Drew is proud to be endorsed by the Conn-Selmer company.

Teaching is a fundamental part of being a jazz musician today, and Drew is delighted to be in demand as a clinician and guest artist. He was given the title of visiting professor for his work at the Contemporary Music Institute in Zhuhai, China.  Additionally, he has given clinics and guest artist performances in Brussels, London, The Netherlands, and in colleges in the States, including Sam Houston State, University of Oklahoma, and UT Tyler.  Drew also teaches at Arrowbear Music Camp in California and the Golden Jazz camp in Zhuhai, China.

To listen to music, and for more information, please visit drewzaremba.com