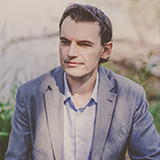 Adam Piotr Żukiewicz is an award-winning, internationally acclaimed concert pianist. He concertized across Europe, United States, Canada, Japan, Brazil, Hong Kong, and Macau, and his performances were broadcast in the USA, Canada, Italy, Slovenia, Germany, and Poland. Mr. Żukiewicz consistently receives critical acclaim, while his innovative programming - focused on exploring connections between the popular and the lesser known gems of the traditional and contemporary repertoire - continues to engage and inspire audiences around the world.

As an active soloist and chamber musician, Adam Piotr Żukiewicz performs internationally in USA, Canada, Germany, Italy, Slovenia, Hong Kong, and Poland. Highlights of recent performances include recitals at St. Martin-in-the-Fields in London (UK), Royal Łazienki Theatre in Warsaw, and Chicago Cultural Center (Dame Myra Hess Memorial Concert Series), concerts with the Greeley Chamber Orchestra, Edmonton Symphony Orchestra, Toronto Sinfonietta, Toronto Concert Orchestra, and Celebrity Symphony Orchestra. Mr. Żukiewicz has performed in some of the most important concert venues, including Carnegie Hall in New York, Kennedy Center in Washington DC, Palau de la Musica Catalana in Barcelona, Residenztheater in Munich, Goldensaal at the Musikverein in Vienna, Teatro alla Scalain Milan, KKL Luzern, and many others. He is also a frequent contributor to the Colorado Public Radio, where his broadcast recordings can be heard on air and online in Colorado and beyond.

Mr. Żukiewicz’s creative musical activities led to a recording of a debut album The Beginnings, exploring musical ideologies and languages of the great masters of the past and the present. This unique album is rooted in the artist’s musical inspirations and artistic philosophy. Opening with the music of Ludwig van Beethoven and Fryderyk Chopin, Mr. Żukiewicz presents the music and cultural heritage of the modern masters Krystian Kiełb (Poland) and Jacobus Kloppers (South Africa/Canada), closing the album with a stunning work by the legendary jazz musician Oscar Peterson.

The Beginnings was released to critical acclaim by the DUX label in November 2018, and selections of the album are broadcast regularly by the Colorado Public Radio Classical in the USA.

Adam Piotr Żukiewicz holds a Doctor of Musical Arts degree from the University of Toronto and Masters of Music degree from Indiana University. He has also studied at the Royal Academy of Music in London, UK, and was a music scholar at the United World College of the Adriatic in Duino, Italy. His mentors and teachers include Arnaldo Cohen, Jerome Lowenthal, Vanessa Latarche, James Parker, Marietta Orlov, Dario de Rosa, Alberto Miodini, and Paweł Zawadzki.

Enthused by sharing music, thoughts and experiences of music, Mr. Żukiewicz also enjoys teaching, lecturing, impromptu performances, singing in an amateur choir, and musical discussions with musicians and music lovers alike. Beyond music, he takes pleasure in reading, connecting with people, sports, travel, and nature, which he finds most inspiring.

Adam Piotr Żukiewicz served as faculty at the University of Toronto and St Michael's Choir School in Toronto. His students studied in renowned institutions such as Indiana University and Eastman School of Music, and their successes include festival and competition awards in Canada and USA.

Mr. Żukiewicz is an Associate Professor of Piano at the University of Northern Colorado in Greeley, Colorado, where he currently resides. He serves as a Resident Faculty Pianist at the International Music Festival of the Adriatic in Duino (Italy), and is a founder and Artistic Director of the Intercollegiate Piano Competition of the West.

In recognition of his teaching, he received the 2017 and 2018 Steinway & Sons Top Teacher Award, and was an adjudicator of the 2018 Steinway Piano Competition.

Mr. Żukiewicz is a founding member of the Max Joseph Piano Trio and the Colorado Piano Trio.