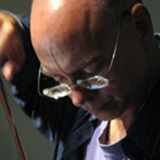 The music of Paul Elwood often incorporates his background as a folk musician and experimentalist on the five-string banjo with that of his voice as a composer who loves the processes and syntax of contemporary writing. Residencies he has received include the American Academy in Rome as Southern Regional Visiting Composer, the Wurlitzer Foundation of New Mexico, MacDowell Colony, Djerassi Artists Residence Program, Ucross Foundation, Camargo Foundation (France), Fundacion Valparaiso (Spain), and the Harwood Museum of Art in Taos. In 2000 he was awarded the Sigma Alpha Iota Philanthropies Inter-American Music Award for Vigils for solo piano, and was featured as a composer and performer in Moscow, Mexico City, Marseille (France), Wollongong (Australia), Edinburgh (Scotland), Darmstadt (Germany), and all over the U.S. As a composer his music has been performed by the symphonies of North Carolina, Charleston, and Wichita, by the Callithumpian Consort of the New England Conservatory, Zeitgeist, pianist Stephen Drury, Tambuco (the Mexican Percussion Quartet), and pipa players Min Xiao-Fen and Gao Hong, among others.