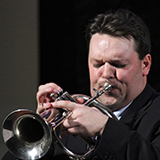 A native of Reno, Nevada, John Adler joined the faculty at the University of Northern Colorado in 2010, coming from Virginia Tech where he taught trumpet and jazz studies for four years. Dr. Adler's D.M.A. in trumpet performance was completed at the University of Miami, where he studied with former principal trumpet of the Chicago Symphony Orchestra Craig Morris.

Dr. Adler has performed with the Reno Philharmonic, the symphony orchestras of Eugene, Miami, and Roanoke, the Kandinsky Trio, the Palm Beach Pops, and many other classical ensembles. He has shared the stage with numerous jazz greats including John Hollenbeck, Maria Schneider, Bobby Shew, and Conrad Herwig, and has played lead trumpet in the Jaco Pastorius Big Band, the Denis Noday Big Band, the Reno Jazz Orchestra, and the Grammy Award Winning University of Miami Concert Jazz Band. He is a founding member of the jazz chamber group Seven Minus.