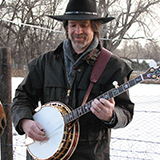 Ron was born and raised in Wichita, Kansas, and started playing the banjo on stage in 1973, when he joined The World's Largest Prairie Dog, a Wichita-based bluegrass band.  Beginning in 1973 Ron taught banjo and guitar extensively while attending college at Wichita State University.  He helped form the regionally popular band Potlatch in 1976 and moved to Colorado Springs, Colorado, with them in 1978. He was a founding member of The Cheyenne Ramblers in Colorado Springs and won the Telluride Banjo Contest in 1984 but in 1987 took a teaching job in Ault, Colorado, and moved to Fort Collins. In 1989 he got the call to join Front Range on banjo and played with them for 15 years, touring all over the United States, Canada and Europe until the untimely death of mandolinist Mike Lantz in 2006.  Front Range recorded seven albums, five of them for Sugar Hill Records, and won an International Bluegrass Music Association award in 1995 for their album”One Beautiful Day,” which was the Gospel Recorded Project of the Year.  Ron was also nominated several times as IBMA Banjo Player of the Year.  In 1997 he was named the Rocky Mountain Region Banjo Player of the Year.  He formed a western swing and bluegrass “side” band called Cowtown Boogie in 1993; it became Cowtown and is still going.  He taught high school social studies for 26 years, retiring in 2013.  In addition to banjo Ron plays all the other bluegrass instruments and sings lead and baritone.  He is also widely recognized for his emcee work and onstage humor.  Ron is married to Julie and is step-dad to Siobahn and Ciaran.