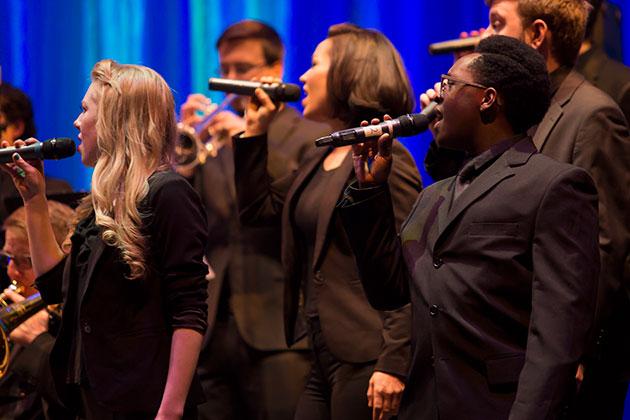 Vocal Jazz performs with Jazz Lab Band I at the 2017 UNC Arts Gala. 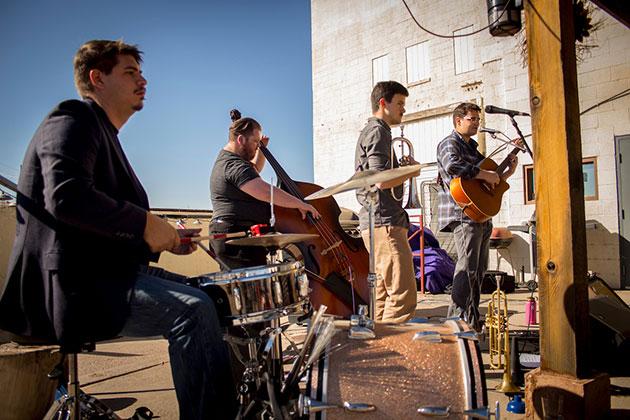 A jazz combo plays at a local venue during UNC's first Day of Music. 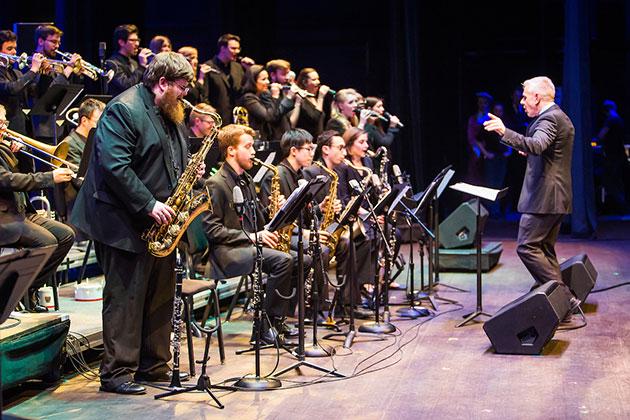 The award-winning Lab I band performs alongside Vocal Jazz members at the UNC Arts Gala in 2017.

UNC’s five big bands, known as “Lab Bands,” have a long history of being among the best college jazz ensembles in the country, and offer students exciting, challenging, and rewarding musical experiences. Alumni of the bands are enjoying successful careers as performers, composers, music industry professionals, and educators.

Vocal Jazz at UNC has a long tradition of national and international acclaim, and UNC’s Vocal Jazz I was the first college vocal group to ever receive a Grammy nomination. Over the years, UNC groups including the Axidentals, Sus4, and Et Cetera have toured the U.S. and Europe, released multiple albums, commissioned and debuted pieces that have become standard repertoire, and have won numerous awards and accolades. Alumni of UNC’s VJ groups are successful professional and studio singers, arrangers, educators, clinicians, and industry professionals.

In addition to its advanced vocal jazz groups, UNC features two additional Vocal Jazz Ensembles named Vocalese and Verve, both under the direction of Amy Murphy. These groups perform diverse repertoire of jazz, Latin, and pop/rock/R&B styles including pieces by New York Voices, The Real Group, Take Six, and other professional vocal groups.

Vocal Jazz Ensembles rehearse twice a week and present at least one concert every semester, with the advanced groups giving additional off-campus performances throughout the school year as well as recording each semester. Each group enjoys a featured appearance at the UNC/Greeley Jazz Festival in April.

UNC’s eight small jazz ensembles (or combos) offer challenging and rewarding experiences in studying and performing jazz. Over the years, UNC’s jazz combos have performed throughout the country and have won many awards. Outstanding combos record at the UNC Recording Studio each year.

Groups meet twice a week– once for a rehearsal and once for Combo Forum, where all combos meet to perform and discuss playing concepts. Combos present one concert each semester and also play at the UNC/Greeley Jazz Festival each April. Outstanding combos have opportunities to perform at other live and studio events.

The UNC Jazz Guitar Ensemble is a specialized group dedicated to celebrating the instrument’s rich history in Jazz. This group presents the students with a special environment where they perform in a section of 5 to 8 guitarists, plus rhythm section. Students concentrate on ensemble interplay, articulation, comping, soloing, sight-reading, and the use of electronic effects.

The group focuses on a wide range of literature, including the music of great guitarists including Wes Montgomery, Pat Metheny, and Jim Hall. They also perform arrangements by Mundell Lowe, Fred Hamilton, and other classic arrangers for the guitar ensemble.

The goal of the ensemble is to prepare guitarists for the wide variety of musical situations experienced by professionals. Students have the opportunity to write arrangements for the group, which are in turn recorded by the students at Studio UNC every spring.

More than 150 students participate in jazz ensembles. Although the groups are comprised primarily of music majors, they are open to all students by audition. Placement auditions are held at the beginning of the fall semester. 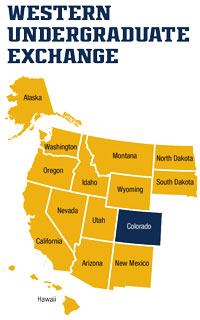 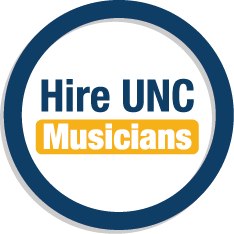