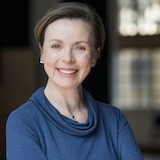 In addition to her academic work, Shelly is also the Co-founder of StateraArts, a national non-profit organization committed to positive action for women in the Arts (www.stateraarts.org.) As an actor, Shelly has worked with the Tony Award-winning Utah Shakespeare Festival, the Colorado and Alabama Shakespeare Festivals, and The Hilberry Repertory Theatre and The JET in Detroit, Michigan. For Little Theatre of the Rockies, Shelly has served as the Executive Director and Interim Producing Artistic Director, and her past acting credits for LTR include Masterclass (2012 Greeley Tribune Best Actress in a Drama), The 39 Steps, Private Lives, On Golden Pond, God of Carnage, Vanya Sonia Masha and Spike, and Collected Stories; and LTR directing credits include Xanadu and The Wolves. Shelly has received directing honors from the Kennedy Center American College Theatre Festival for Compleat Female Stage Beauty at the University of Minnesota Moorhead, and Intimate Apparel and Legacy of Light at the University of Northern Colorado. She also directed As You Like It, Pride and Prejudice, and She Kills Monsters at UNC, and The Taming of the Shrew for the Utah Shakespeare Festival’s 2014 Shakespeare in the Schools multi-state tour.