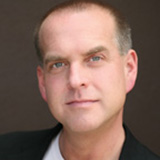 A native of St. Louis, John was the recipient of the 1984 Regional Director's Award. John received his MFA from the University of California, Davis, and went on to direct/choreograph many musical productions in the San Francisco and Bay area including, The Fantasticks, The Sound of Music, A Chorus Line, Side by Side by Sondheim, Little Shop of Horrors, Cabaret, Anything Goes, and A Grand Night for Singing (for which he received two 1997 Bay area "Arty Awards" for 'Best Director' and 'Best Musical').  While at UNC and Little Theatre of the Rockies, John has directed/choreographed Blood Brothers, Into the Woods, Guys and Dolls,Falsettos, Always...Patsy Cline, The Secret Garden, My Fair Lady, No No Nanette, The Sound of Music, My Way...A Musical Tribute to Frank Sinatra, 42nd Street, A Grand Night for Singing, Grease, Cabaret, Side Show, Grand Hotel, 1940's Radio Hour, The Boyfriend, and directed Chicago, Joseph and the Amazing Technicolor Dreamcoat, Fiddler on the Roof, West Side Story, Annie, and Damn Yankees. John also directed/choreographed My Way for the Bucks County Playhouse in Pennsylvania, Godspell for GCTT, and choreographed My Way at the Denver Center for the Performing Arts.