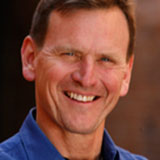 Head of and Professor of Acting

Ken Womble is Head of Acting and Professor of Theatre at the University of Northern Colorado. He holds an MFA in Acting from Southern Methodist University, and a BFA in Acting from Florida State University. He studied with master teachers Michael Howard and Warren Robertson in New York.

As an actor in New York and Los Angeles for sixteen years Ken appeared in two Off Broadway premieres, and was the voice of a BBC radio announcer in Freud's Last Session at New World Stages. He played the title role in the indy film Bartleby and has had recurring parts on Guiding Light, General Hospital and All My Children.

Ken continues to act at the Little Theatre of the Rockies in such productions as The 39 Steps, Private Lives, God of Carnage, Vanya & Sonya & Masha & Spike and Picnic. He is a member of Actors Equity and SAG/AFTRA.

He has directed over fifty plays, including The Odd Couple (Female version) at the Little Theatre of the Rockies, and award winning productions of August: Osage County, The Three Sisters and Dancing at Lughnasa at UNC. For television Ken directed the situation comedy pilot Under the Desk.

He coaches actors for film, television and Broadway, and conducts audition and film acting workshops at numerous venues.

Ken lives in the foothills of the Rocky Mountains with his wife Sandy.

His book, Inside Act: How Ten Actors Made It - and How You Can Too, hailed by the Chicago Tribune as "a 2014 book that flew under the radar," explores how actors become successful, through interviews with ten working actors and twenty of their agents, managers and directors. Inside Act was published by Hansen Publishing Group in 2014.

Ken was commissioned by UNC to write and direct the first-ever documentary film on novelist James Michener, James A. Michener, An Epic Life, and for his work was named as the College of Performing and Visual Arts 2008 College Scholar. His adaptations of A Midsummer Night's Dream and two other classics have been produced throughout the U.S.