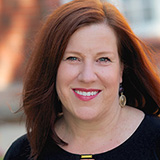 Dr. Toewe holds her bachelor's degree in Biology from The College of William and Mary in Virginia, her MFA in Costume Design from Tulane University in New Orleans, and her PhD from the University of Colorado at Boulder.

Anne M Toewe Ph.D. is a Professor of Theatre Arts with her specialty in Costume Design, and serves as the head of Design and Technology and Resident Costume Designer for the School of Theatre Arts and Dance. Prior to her arrival to UNC in 2003, Dr. Toewe taught at New World School of the Arts in Miami, FL, Florida Atlantic University in Boca Raton, FL, Palm Beach Atlantic College in West Palm Beach, FL and in the Broward Community College system in both North Miami and Davie, FL. While teaching in Florida, Dr. Toewe taught Costume Design, Costume Technology, Stage Makeup, and Introduction to Theatre.

In addition to teaching, Dr. Toewe has served as a freelance costume designer. Prior to arriving to Colorado, she designed for a variety of venues on the east coast, including theatre, opera, film, print, and television. Among Dr. Toewe's favorite costume designs in Florida The Rocky Horror Show, The Mystery of Edwin Drood, Angels in America, and Romeo and Juliet, as well as several MTV music videos. While designing in Miami, Dr. Toewe received a Carbonelle award for Best Costume Design for GableStage's production of The Dead. Prior to her residence in Florida Dr. Toewe worked as a project manager at the notable Broadway costume build house Parsons-Meares.

Since arriving to UNC, Dr. Toewe has designed costumes for more than sixty productions. Her favorite designs at UNC include Sweeney Todd, the Demon Barber of Fleet Street, Jekyll and Hyde, Titanic, My Fair Lady, and The Elephant Man, to name a few.  Her designs have garnered her several Kennedy Center American College Theatre Festival (KCACTF) meritorious achievement awards, and she has designed numerous shows that have been identified as the Best Costume Design by the Greeley Tribune. Additionally, in 2009, Dr. Toewe made her directorial debut at UNC with STAD's production of Eclipsed, which earned her a KCACTF meritorious achievement award for Best Direction of a play.